Stata is a complete, integrated software package that offers you everything you need for data analysis: data manipulation, visualization, statistical analysis and automated reporting.

Explore all of Stata’s features

You can point and click to create a custom graph. Or you can write scripts to produce hundreds or thousands of graphs in a reproducible manner. Export graphs to EPS or TIFF for publication, to PNG or SVG for the web, or to PDF for viewing. With the integrated Graph Editor, you click to change anything about your graph or to add titles, notes, lines, arrows, and text.

All the tools you need to automate reporting your results.

Lots of folks talk about reproducible research.
Stata has been dedicated to it for over 30 years.

We constantly add new features; we have even fundamentally changed language elements. No matter. Stata is the only statistical package with integrated versioning. If you wrote a script to perform an analysis in 1985, that same script will still run and still produce the same results today. Any dataset you created in 1985, you can read today. And the same will be true in 2050. Stata will be able to run anything you do today.

Invoke Python interactively or embed Python in your Stata code.

Seamlessly pass data and results between Stata and Python.

Use any Python package within Stata

When it comes time to perform your analyses or understand the methods you are using, Stata does not leave you high and dry or ordering books to learn every detail.

Each of our data management features is fully explained and documented and shown in practice on real examples. Each estimator is fully documented and includes several examples on real data, with real discussions of how to interpret the results. The examples give you the data so you can work along in Stata and even extend the analyses. We give you a Quick start for every feature, showing some of the most common uses. Want even more detail? Our Methods and formulas sections provide the specifics of what is being computed, and our References point you to even more information.

Stata is a big package and so has lots of documentation – over 17,000 pages in 33 volumes. But don’t worry, type help my topic, and Stata will search its keywords, indexes, and even community-contributed packages to bring you everything you need to know about your topic. Everything is available right within Stata.

We don’t just program statistical methods, we validate them.

All of Stata’s features can be accessed through menus, dialogs, control panels, a Data Editor, a Variables Manager, a Graph Editor, and even an SEM Diagram Builder. You can point and click your way through any analysis.

If you don’t want to write commands and scripts, you don’t have to.

Even when you are pointing and clicking, you can record all your results and later include them in reports. You can even save the commands created by your actions and reproduce your complete analysis later.

Easy to grow with

Stata’s commands for performing tasks are intuitive and easy to learn. Even better, everything you learn about performing a task can be applied to other tasks. For example, you simply add if gender==”female” to any command to limit your analysis to females in your sample. You simply add vce(robust) to any estimator to obtain standard errors and hypothesis tests that are robust to many common assumptions.

The consistency goes even deeper. What you learn about data management commands often applies to estimation commands, and vice-versa. There is also a full suite of post-estimation commands to perform hypothesis tests, form linear and nonlinear combinations, make predictions, form contrasts, and even perform marginal analysis with interaction plots. These commands work the same way after virtually every estimator.

Sequencing commands to read and clean data, then to perform statistical tests and estimation, and finally to report results is at the heart of reproducible research. Stata makes this process accessible to all researchers.

Everyone has tasks that they do all the time—create a particular kind of variable, produce a particular table, perform a sequence of statistical steps, compute an RMSE, etc. The possibilities are endless. Stata has thousands of built-in procedures, but you may have tasks that are relatively unique or that you want done in a specific way.

If you have written a script to perform your task on a given dataset, it is easy to transform that script into something that can be used on all of your datasets, on any set of variables, and on any set of observations.

See how easy automation is in Stata »

Some of the things you automate may be so useful that you want to share them with colleagues or even make them available to all Stata users. That’s also easy. With just a little code, you can turn an automation script into a Stata command. A command that supports standard features that Stata’s official commands support. A command that can be used in the same way official commands are used. 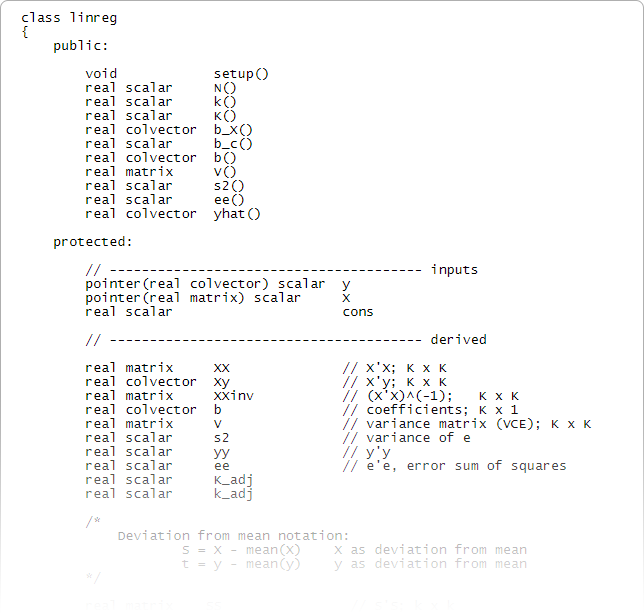 Mata has the structures, pointers, and classes that you expect in your programming language and adds direct support for matrix programming.

Though you don’t need to program to use Stata, it is comforting to know that a fast and complete programming language is an integral part of Stata. Mata is both an interactive environment for manipulating matrices and a full development environment that can produce compiled and optimized code. It includes special features for processing panel data, performs operations on real or complex matrices, provides complete support for object-oriented programming, and is fully integrated with every aspect of Stata.

Stata even let’s you incorporate C, C++, and Java plugins in your Stata programs via a native API for each language. And you can even embed Java code directly in your Stata code!

Stata is so programmable that developers and users add new features every day to respond to the growing demands of today’s researchers.

With Stata’s Internet capabilities, new features and official updates can be installed over the Internet with a single click.

Stata technical support is free to registered users of the current release (Stata 17), which means you get much more than you pay for.

We have a dedicated staff of expert Stata programmers and statisticians to answer your technical questions. From tricky data management solutions to getting your graph looking just right and from explaining a robust standard error to specifying your multilevel model, we have your answers.

Stata will run on Windows, Mac, and Linux/Unix computers; however, our licenses are not platform specific.

That means if you have a Mac laptop and a Windows desktop, you don’t need two separate licenses to run Stata. You can install your Stata license on any of the supported platforms. Stata datasets, programs, and other data can be shared across platforms without translation. You can also quickly and easily import datasets from other statistical packages, spreadsheets, and databases.

Used by researchers for more than 30 years, Stata provides everything you need for data science—data manipulation, visualization, statistics, and automated reporting.

Select your discipline and see how Stata can work for you.

Stata is distributed in more than 180 countries. Our authorized distributors offer services such as basic technical support and training, and carry Stata inventory so delivery is fast.

Stata is not sold in modules, which means you get everything in one package!

Stata offers several purchase options to fit your budget. Annual and multi-year subscriptions ensure you always have access to the latest features. Contact a sales representative or browse our products to find out more about our affordable options.

Stata for Mac with Apple Silicon